The 2020 Halloween Update is the 45th update of Asphalt 8: Airborne.

BURN RUBBER IN THE GAUNTLET

Show off your power in the enthralling new competition with one-on-one races and a huge number of rewards! Challenge rival racers, set your personal record and win!

The most frightful season is coming! HALLOWEEN FESTIVAL kicks off with the Dodge Tomahawk & Morgan Aero GT!

All of these cars are Festival-Unlockable only.

The new cars will need the following cards:

The players received the following Thanksgiving gifts from Gameloft for logging in during November 26 - 28, 2020: 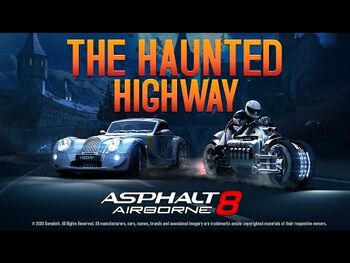