Alps is a location in the Asphalt series. In real life the Alps are one of the great mountain range systems of Europe stretching approximately 1,200 km (750 mi) consisting of 8 Alpine countries: France, Switzerland, Austria, Germany, Monaco, Italy, Liechtenstein, and Slovenia.

Introduced in the Asphalt Xtreme Alps Update, the track is identical to its Asphalt 8: Airborne rendition but now with significantly more snowfall and different starting points. 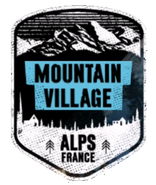 The Alps track reuses its layout from Azure Coast, but with an additional route.

Based in Switzerland like its predecessor, this rendition of the Alps has two tracks:

On the regular version, the race begins on a section of road lined with flags for the racing events held there and flags for the host country. This is near what appears to be a bridge that is under construction, as evidenced by the presence of cranes in the area and some unassembled building materials.

Following a left turn that allows for wider drifting, the road bifurcates into two possible routes: on the right is a long straight path that has curved ramps on both sides of the track(only on the regular version) which is scattered with destructible boulders, and on the left is a curved path which has a partial landslide as an obstacle in the road.

The two split roads re-unite and take the race over a stretch of track which leads to a winding white bridge. Here, there are numerous ramps and ledges to facilitate stunts, barrel rolls, flat spins and air-speed maneuvers. Vehicles with lower speeds are advised to take extra care when attempting to launch from the first ramp adjacent to the upper section of the bridge, as their lower jump clearance can often result in a wreck.

While racing across the aforementioned bridge, an avalanche will occur. The avalanche itself is completely harmless to the player and does not affect their vehicle in any way, however the brief reduced visibility it causes can pose risks of colliding with unseen traffic.

The track splits again, but this time into three possible routes: on the left is the shortest route through a covered tunnel that leads straight towards the Finish Line, in the middle is a slightly-hidden detour that leads off a steep jump that takes the player right above the first route on the left (only on the regular version), and on the right is the longest route that leads through a picturesque traditional village that comprises several log cabins and chalets, as well as a ski resort. All three paths lead towards the Finish Line.

Towards the end of the race, another avalanche will occur. This one simply pushes any traffic out of the way and also does not pose any danger.

Moving cable cars, paragliders and red helicopters can be seen in the skies above the track, especially in pre-and post-race cutscenes.

Every Christmas season, the Alps becomes filled with Christmas decorations. Christmas boxes and other decorations fill the route, with additional boxes allowing for more City Havocs than normal.

The following vehicles have their banners depicted in the Alps: 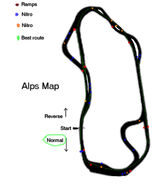 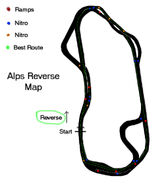 A Koenigsegg One:1 knocking down a Koenigsegg Agera R in a race in the Alps.

A Porsche 918 Spyder with Weissach Package after a race in the Alps.

The Alps track is based in Switzerland. Also, paragliders can be seen off in the distance.

A billboard for Asphalt 9: Legends, as seen near the unfinished bridge. 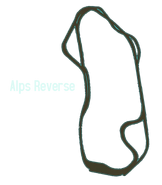 A McLaren P1™ after an Elimination race in Alps Reverse

A billboard for Asphalt 9: Legends, on the side of the unfinished bridge.

Alps reuses the layout of Chamonix from Asphalt 6: Adrenaline, but has an extra route.