Asphalt Wiki
Register
Don't have an account?
Sign In
Advertisement
in: Locations, North America, United States of America,
and 3 more

Asphalt 8: Airborne
A prominent location in popular culture and video games, Area 51 is a highly-classified research base in Southern Nevada, United States of America. It is featured in the Asphalt series as a race track.

The United States Air Force facility commonly known as Area 51 is a remote detachment of Edwards Air Force Base, within the Nevada Test and Training Range. According to the Central Intelligence Agency (CIA), the correct names for the facility are Homey Airport (ICAO: KXTA) and Groom Lake, though the name Area 51 was used in a CIA document from the Vietnam War. Other names used for the facility include Dreamland, and nicknames Paradise Ranch, Home Base and Watertown. The special use airspace around the field is referred to as a Restricted Area 4808 North (R-4808N).

The base's current primary purpose is publicly unknown; however, based on historical evidence, it most likely supports development and testing of experimental aircraft and weapons systems (black projects). The intense secrecy surrounding the base has made it the frequent subject of conspiracy theories and a central component to unidentified flying object (UFO) folklore. Although the base has never been declared a secret base, all research and occurrings in Area 51 are Top Secret/Sensitive Compartmented Information (TS/SCI). In July 2013, following an FOIA request filed in 2005, the CIA publicly acknowledged the existence of the base for the first time, declassifying documents detailing the history and purpose of Area 51.

Area 51 is located in the southern portion of Nevada in the western United States, 83 miles (134 km) north-northwest of Las Vegas. Situated at its center, on the southern shore of Groom Lake, is a large military airfield. The site was acquired by the United States Air Force in 1955, primarily for the flight testing of the Lockheed U-2 aircraft. The area around Area 51, including the small town of Rachel on the aptly named "Extraterrestrial Highway", is a popular tourist destination.

Area 51 was released in the Santa's Gift Update and has four layouts:

In each track, the player drives through the desert of Southern Nevada via canyons and a small town with a gas station. At the research base, the player starts at the airstrip and can enter and exit the research base through several entrances/exits. In one of the entrances/exits, there is a grid of red lasers, although these are hollow and will not wreck the player's vehicle. The ramps between the lasers can be hazardous as approaching these with too much speed may cause the vehicle to miss the second ramp and be wrecked.

On the track, traffic vehicles are both normal civilian vehicles and military vehicles seen in San Diego Harbor.

In the Multiplayer League Update, Area 51 was revamped to have better visibility and lighting, as well as new nitro locations.

Classified and The Secret Lab are accessible in Gate Drift.

The following cars have their banners depicted in Area 51: 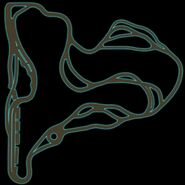 The Lamborghini Egoista's banner is set in Area 51. 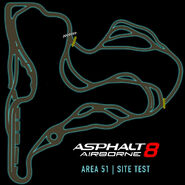 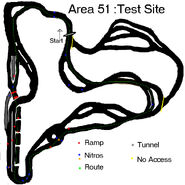 An ED Design Torq after a race in Test Site: Omega.

A Peugeot SR1 after a race in Classified.

This advanced military stealth jet can occasionally be seen near the runway.

The AI routing glitch following a Gate Drift race, where the player's vehicle attempts to cross the concrete barrier(s).

An Aston Martin DB9 Coupé during a Gate Drift event in The Secret Lab.

A Mosler GT3 after a race in The Secret Lab.

The Mothership in the background.