Asphalt Wiki
Register
Don't have an account?
Sign In
Advertisement
in: Updates (Asphalt 8), Updates by date (Asphalt 8), 2013,
and 4 more

There are 21 locations in the game and a total of 65 playable tracks.

Asphalt 8: Airborne currently has 306 vehicles (291 cars and 15 motorcycles), divided into 5 classes: D, C, B, A and S, with Class D being the lowest and Class S being the highest. For the full list of vehicles, see this page. Most vehicles also belong to a Collection, that give Credits or other various items as bonuses when the player owns all vehicles of a collection. Vehicles can be bought for

(From 2020 Halloween Update onwards), or can be assembled with Blueprints (prior to 2019 Holiday Update), unlocked through Car Mastery, or obtainable only within their respective events.

Asphalt 8 originally launched with 47 cars, and more are being added since the Free to Play Update.

However, 12 vehicles have been removed from the game for non-owners and one is a one-time promotional TLE-exclusive car, reducing the number of playable vehicles to 297. To know more, see Asphalt 8: Airborne/Licensing Issues.

The 10 original Class B cars

The 10 original Class A cars

Prior to 2019 Holiday Update, the "real" speed of cars (mostly Class S cars and some high-end Class B and A cars) differed from what was indicated in the HUD. Check the page Speed Modification for more details.

Vehicles in Asphalt 8: Airborne can be upgraded in two ways:

Vehicles can also have an "Ultimate" status either by conversion in an update or are released as such. An Ultimate status means that the vehicle will be at its maximum performance potential with no Upgrades or Pro Kits being required.

There are three ways to play a multiplayer match on Asphalt 8: Airborne:

Introduced in the Car Mastery Update, Car Mastery (or just Mastery) is another single player game mode. It offers 15 single-lap races for each car of the game, with the possibility to earn Credits, Car Upgrades, Boosters, Tokens and Licenses. As of the Fast Lane Update, all completed Mastery races are non-replayable. See the dedicated Car Mastery page for more details.

The in-game news feed Gameloft Confidential is also available as web page, though it is not fully functional. The videos can be watched, when you remove the link: prefix from the URL. 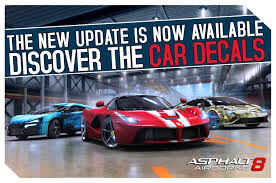 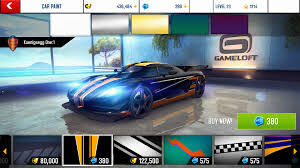 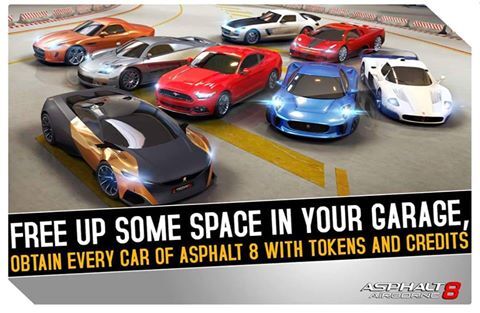 Now you can personalize your favorite cars!

Premium cars for everyone!