Asphalt Nitro is a spin-off of the Asphalt series, based on the 2013 mainline rendition Asphalt 8: Airborne. Exclusive to Android, Asphalt Nitro was officially released on May 13, 2015, with a huge overhaul over the beta version.

There are 8 race modes available:k

In addition to multiplayer and career mode, Quick Solo Race mode also appears in Asphalt Nitro. Here, the player can play any mode with any car on any tracks, but Credits won't be earned.

There are 6 locations in the game and 16 playable tracks total. Ordered by Quick Race. Each location's picture in the game is the flag of that country.

There are four upgrade aspects in this game. The player can buy 5 levels of each upgrade for each car:

However, recently, with the new concept, the Pro Kits are now integrated into the upgrade system making the game upgrade individual parts like upgrades but now Pro Kit cards are required.

The Career mode is divided into 6 seasons:

Asphalt Nitro has 7 Achievement Sets. The player must complete all of the Achievements in the set to claim them. They are largely similar to the achievements in Asphalt 8: Airborne, except this time, they now grant rewards.

Asphalt Nitro has 3 songs (2 songs in old concept): One for the main menu and an additional two for races (only one song in old concept). They are Gameloft original songs. However, Chemistry / DJ Gontran, from Asphalt 8: Airborne, was used in the old trailer. The new trailer uses a composed soundtrack. The main menu song is made by DJ Zephyr as Known As Anthony Dominguez Flores. 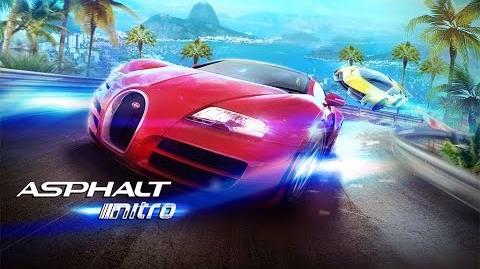 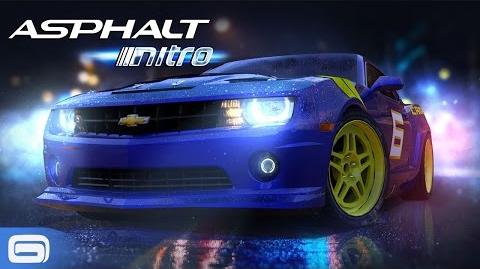