The table to the right shows the number of all contributions as of February 28, 2020. It is updated manually, so it can take some days until your contributions are listed.

You can check your contributions here: 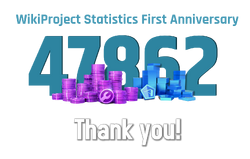 1 was subtracted from the highest reward, and 1

1 was added to the lowest reward.

Players can check their contributions here:

Here's how to get the rewards:

3,774 but donated the rewards to the other players because he quit the game. Thanks also to AntoniuCalacean, KoninaElena, Non-VIP Forever! and TransportFan2014 who donated their rewards.

Retrieved from "https://asphalt.fandom.com/wiki/Asphalt_Wiki:WikiProject_Statistics/Contributors?oldid=365165"
Community content is available under CC-BY-SA unless otherwise noted.