Asphalt 8: Airborne
Barcelona is a race track in the Asphalt series. It is based on the Spanish city of the same name.

On the regular version, the race begins facing northbound in the Olympic Port (Catalan: Port Olímpic) neighborhood (southbound on the reverse version), leading to a sharp 90° right turn that leads past the Hotel Arts building and Casino Barcelona (on the right side) and the Torre Mapfre skyscraper as well as the Moll de la Marina (on the left side where boats and yachts can be seen).

Another 90° right turn takes the race southbound along a long stretch of road with Barceloneta Beach towards the left side, and a collection of restaurants, Hospital Del Mar, the Parc de la Barceloneta, and other various buildings on the right.

In the middle of the track is Port Vell, Barcelona's waterfront harbor. There is a series of ramps that cross several platforms here. The first ramp covers a huge gap that is often used by a passing cruise ship. Colliding with said cruise ship will often result in a wreck, so extreme care when launching off this ramp is recommended, especially for vehicles with low top speeds.

Once the platforms are cleared, a short straight path takes the race westbound, passing by Barcelona's old Customs Building on the left side and the Columbus Monument (Catalan: Mirador de Colom) which is located slightly off-track.

Here, there is a north-turning road section that splits into three possible routes: a longer route that goes through some narrow alleys, the overground middle route that is wide and bifurcates halfway, leading to the B-10 Motorway (Catalan: Ronda Litoral de Barcelona), and the shortest route that is underground and leads towards a covered tunnel, also part of the B-10 Motorway.

The tunnel has a large amount of pillars that the player can knock down to get a large City Havoc count, up to 35x or so. Upon exiting the tunnel, there is a portion of road with overground and underground sections that leads to the Finish Line. On the right of this road is the Campus Universitari Mar and the Parc de Recera Biomedica de Barcelona building, and on the left is the Parc de les Cascades.

The following vehicles have their banners depicted in Barcelona: 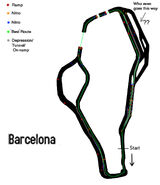 Pre-race screen featuring the Hotel Arts building on the left and the Torre Mapfre skyscraper on the right. In the foreground is the Golden Fish Sculpture (El Peix).

Two Renault DeZirs above the bypassing cruise ship in Barcelona.

A Volkswagen W12 performing a Sandwich Knockdown on a Ferrari LaFerrari before crossing the sea.

A RUF RT 12 S performing an Air Knockdown on another RUF RT 12 S after jumping the sea. Note that as this is after the first lap of the race, the yacht that passes by is not present.

A W Motors Fenyr Supersport after a race in Barcelona.

A post-race Lamborghini Aventador SV cruising southbound along the beachside road with the in-game version of the W Barcelona Hotel in the background.

A post-race Lamborghini Veneno jumping across the gaps in the harbor. In the background is one of the 2 large cruise ships that are each designated "Gameloft".

A trio of Lamborghini Centenario cruising through the tunnel section of the B-10 Motorway.

A post-race Lamborghini Gallardo LP 560-4 2013 having Passed a Sprint Run heading in the opposite direction on the regular track.

Pre-race screen featuring Barcelona's Old Customs Building on the left and the Columbus Monument in the distance.

A billboard for Asphalt 9: Legends, as seen on top of the in-game version of the Hospital del Mar. 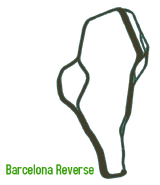 A McLaren P1™ GTR after an Elimination race in Barcelona Reverse, firing a Perfect Nitro.

One of the special pre-race screens.

A shot of one of Barcelona's narrow streets.

A billboard for Asphalt 9: Legends, as seen on top of the in-game version of the Hospital del Mar.