Cairo (القاهرة) is the capital of Egypt. The city's metropolitan area is one of the largest in Africa, the largest in the Middle East and the Arab, and the 15th largest in the world, and is associated with ancient Egypt, as the famous Giza pyramid complex and the ancient city of Memphis are located in its geographical area. Located near the Nile delta, modern Cairo was founded in 969 CE by the Fatimid dynasty, but the land composing the present-day city was the site of ancient national capitals whose remnants remain visible in parts of Old Cairo. 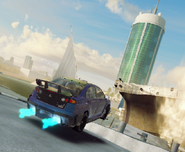 A temple on the Gezira Island

A billboard for a shawarma restaurant

A billboard for a musical by "The Sphinx"