The driver has the option of purchasing either a 7-speed manual or 8-speed automatic transmission. The suspension system is tuned to fit nicely about halfway between the Stingray and the Z06 in terms of aggressiveness. The Grand Sport weighs an estimated 3428 pounds, a hundred or so pounds off the Z06 model. It also comes with the choice of 10 exterior colors and a selection of stripes.

Reviews of the 2017 Chevrolet Corvette C7 Grand Sport Convertible praise the firm grip on the road owing to the magnetic control grip, and the smooth driving over even rocky roads. However, the front air dam, which often scrapes against the ground owing to its low clearance, is also pointed out.

The optional Z07 package for the 2017 Chevrolet Corvette C7 Grand Sport Convertible adds Carbon-ceramic brake rotors, a stage 2 Aero package that feature various enhancements of the bodywork, and an increased grip from 1.05g to 1.2g. 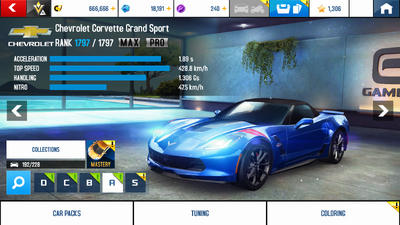 Although the Chevrolet Corvette Grand Sport has a slower acceleration rating than the BMW 3.0 CSL Hommage, the Corvette GS has superior nitro efficiency. At MAX+PRO with an 0808 Elite tuning, the Corvette GS can reach a top speed of 322.2 mph (518.8 km/h), making it the second-fastest Class A car in the game, beaten only by the Mercedes-Benz SLK 55 AMG Special Edition, and the fourth-fastest vehicle in the entire game, behind only the M-B SLK SE, Devel Sixteen Prototype and Kawasaki Ninja H2R.

While the Chevrolet Corvette Grand Sport handles corners better than the Chevrolet Corvette C7, its handling at base level is still relatively subpar, and it suffers from a wide drifting radius, putting it at mercy of the likes of the Rezvani Beast Alpha, BMW 3.0 CSL Hommage, AM Vulcan, McLaren MP4-31, Apollo Intensa Emozione, 2018 McLaren X2, and Lamborghini Centenario LP 770-4, all of which are slower but are more capable of maintaining their speed around corners. The Corvette GS's handling improves considerably with upgrades, though, so it is recommended to upgrade its handling and acceleration at the same time as opposed to one at a time like with most other cars. The mediocre drifting can also be countered by entering a corner earlier than usual and with the use of drifting techniques such as "drift-boosting". Notwithstanding this, the abovementioned 5 cars all have better overall stats than the Corvette GS with the exception of top speed. It should be noted that the Hommage's only advantage over the Corvette GS is its better drifting abilities, though both cars are not very good at this.

This is the official review of the Chevrolet Corvette Grand Sport, made by Elite HectorX and published on May 17, 2017:

Final verdict: "The Chevrolet Corvette Grand Sport is a really fast car (only SLK 55 SE and Devel Sixteen have higher top speed). It can do 53.988 seconds in French Guiana, which is nuts 0.1 seconds slower than the Aston Martin Vulcan, and 0.6 seconds faster than the BMW 3.0 CSL Hommage. Despite its bad acceleration, it will be a reference to beat in future events thanks to its top speed and nitro duration."

Despite the Chevrolet Corvette Grand Sport's bias towards top speed and nitro efficiency at the expense of all other aspects, especially with regards to drifting, it is still a high-end Class A car and, due to its extreme speed, serves as a good alternative to the Mercedes-Benz SLK 55 AMG Special Edition.

The Chevrolet Corvette Grand Sport's high time-limited purchase price means that it is usually more cost-effective to obtain it via completing its EDD event.

The usability of the Chevrolet Corvette Grand Sport in Multiplayer League depends on the driver's skills. Its poor handling at base level means it is often driven with a MAX+PRO configuration and 0808 elite tuning, and due to its competition at MAX+PRO rank being top-end vehicles, such as the AM Vulcan, Arrinera Hussarya GT, McLaren MP4-31, Apollo IE, McLaren X2, and Lambo Centenario, the use of triple boosts is compulsory for every race.

While the Chevrolet Corvette Grand Sport is generally faster than nearly all the high-end Class S cars, its poor acceleration and drifting makes it a less optimal choice for short and/or technical tracks like Sector 8, Alps and Tenerife (except Cloud Nine), while its extreme top speed and long nitro duration makes it ideal for Tokyo, Azure Coast and Barcelona with simple turns and frequent nitro pickups. Due to its better handling stat at MAX+PRO, the Corvette GS can also perform surprisingly well in Venice, Dubai, Area 51, and Iceland, which are otherwise unsuitable for most cars with wide drift radius.

With the Chevrolet Corvette Grand Sport's bias towards top speed and nitro duration, its poor acceleration and drifting means that a Corvette GS driver must be considerably skilled if they want to consistently keep up with other vehicles that have better acceleration and handling, such as the McLaren Mercedes MP4-25, BMW 3.0 CSL Hommage, Apollo IE and McLaren X2. 2- and 3-lap races help to mitigate the Corvette GS's lower acceleration rating, allowing it to catch up to and overtake most other cars with its higher top speed, although this comes at the cost of more of the Corvette GS's condition being used. Under most circumstances, the Corvette GS needs to run for a flawless 55-58 seconds in order to outrun a Vulcan, by which time it would have already overtaken nearly every other vehicle in the game. Multiplayer "mobs" that try to knockdown other players are also a potential problem; if these players target the Corvette GS, it has virtually no chance of getting a podium finish unless a leading car in that race wrecks as well.

Due to the Chevrolet Corvette Grand Sport's optimal multiplayer tune being MAX+PRO, and being an alternative to the Mercedes-Benz SLK 55 AMG Special Edition (should the player own both but wish to preserve a low-rank multiplayer tune for the SLK SE), the Corvette GS also sees considerable use in TLEs, although both the Rezvani Beast Alpha and McLaren Mercedes MP4-25 are usually available in the same TLEs as the Corvette GS. While the Corvette GS is generally inferior to the Beast Alpha and MP4-25 due to virtually all TLEs being 1-lap races, it can also potentially achieve faster lap times than either car on the same tracks where it excels in multiplayer.

Following its debut in its EDD event, the Chevrolet Corvette Grand Sport was first made available for sale on July 1, 2017, for a limited-time price of 13250

11,925 . The Corvette GS was made permanently available in the garage on November 4, 2018, with its original limited-time price.

The Chevrolet Corvette Grand Sport Enduro Double Down was first held on May 8, 2017, following the Lotus Evora Sport 410's R&D. It was held again on December 4, 2017 alongside the Honda Civic Type R's Championship.

60,000, making this EDD the shortest one to date. Bonus cars include the Chevrolet Corvette C7 and Volkswagen Golf Design Vision GTI.

The Chevrolet Corvette Grand Sport now appears as a high-end Class B car with the following statistics.

The Corvette was available with a limited time BP pack and an Unleashed event between September 14-21 2018.

Unlike in Asphalt 8: Airborne, the Corvette has a low top speed, slow acceleration, excellent handling, drifting and nitro efficiency, the latter being second best in its class.

In the Community Update, the Corvette's nitro efficiency was increased slightly.

In the Slipstream Update, the Corvette's handling and nitro were buffed.

Overall, the Corvette GS is an amazing choice compared to the SCG 003S and Cadillac Cien Concept. The Corvette is also a popular choice for multiplayer with its easy driving characterics.

Retrieved from "https://asphalt.fandom.com/wiki/Chevrolet_Corvette_Grand_Sport?oldid=356931"
Community content is available under CC-BY-SA unless otherwise noted.