Asphalt Wiki
Register
Don't have an account?
Sign In
Advertisement
in: Vehicles, Vehicles in Asphalt 8: Airborne, Mid-Engine, RWD,
and 4 more

The Despicamobile, also known as Villain Wheels, is a fictional vehicle from Illumination's animated film Despicable Me 3.

From dialogue exchanged between Felonius Gru and his brother, Dru Gru, it is implied that the Despicamobile was first built and driven by Robert Gru, their father, at some point before the events of Despicable Me 3.

The Despicamobile was first introduced in Despicable Me 3, having been under the ownership of Dru. He described it as "Dad's villain wheels" and urged his brother to ride with him as he drove it around the area.

During their drive, Dru described the Despicamobile's features: it accelerated from 0-400 in 3 seconds, could withstand a nuclear blast, was heavily armed and was a hybrid. Following a near-miss with a local farmer, the Despicamobile was accidentally driven off a cliff, and some of its other features were shown: its pointed front contained a grappling hook and tow cable, and it could generate spiked tires which, coupled with the power from its oversized rear turbine, allowed it to be driven along vertical surfaces easily. The portion of the car housing the driver and passenger could be self-righted when the car was being driven at odd angles. Towards the end of the film, the Despicamobile was also shown to be capable of transforming into a boat and a plane, and was also equipped with missiles. During the climax of the film, the Despicamobile was destroyed by the antagonist, Balthazar Bratt, by taking down its rear turbine while in plane mode, which caused it to crash and explode. 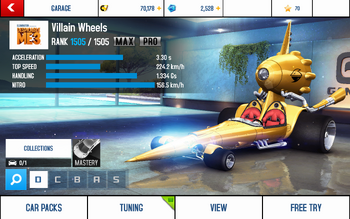 The Despicamobile, named Villain Wheels, was added in the Munich Update as an event-only high-end Class D car with the following rank statistics:

The Villain Wheels's MAX+PRO rank was 98 points and 127 points higher than the Mazda RX-8 and Hyundai i30 N at MAX+PRO with an Elite Tuning of 0808, respectively. At its MAX+PRO rank with a Tuning Kit applied, the Villain Wheels had a total speed of 246.1 mph (396.3 km/h) when level 3 nitro is active, 11.2 mph (18.1 km/h) faster than the RX-8 and 9.8 mph (15.8 km/h) faster than the i30 N. With a starting nitro boost of 52.4 mph and a maximum boost of 97.8 mph, the Villain Wheels still has the largest nitro boost of any vehicle in the game, beating the Ford F-150's maximum nitro boost by a whopping 31.2 mph (a 46.8% increase). The high nitro efficiency rating and powerful boost meant that, although the Villain Wheels had relatively poor acceleration, it would usually reach a decent enough speed to catch up or overtake competitors using only the default amount of nitro given to players at the start of a race.

The Villain Wheels's most significant failings were its handling and extremely low raw top speed. Despite what its handling stat showed, the Villain Wheels had severe understeer, especially while using nitro. At level 3 nitro, even the slightest corner required skill to negotiate as the Villain Wheels was virtually non-responsive to steering. Precisely timed mid-drift boosting was required to handle corners while maintaining speed. On the other hand, the Villain Wheels had incredibly sharp drifting capabilities — it could do donuts on the highways in Azure Coast. Similar to other nitro-focused cars, the Villain Wheels also had an extremely low top speed without nitro. At MAX rank, its top speed was only 133.1 mph (214.4 km/h), 3.5 mph (5.7 km/h) slower than a Mazda 6 at starting rank. In addition, due to the front wheels being spaced closer to each other than the rear wheels, and the rear wheels being considerably wider than the front wheels, the Villain Wheels had a nasty tendency to stick to walls if the driver got too close to them, as the rear wheel touching the wall would get "stuck" while the other three wheels continued spinning, causing the car to drive into and scrape along the wall until it lost most of its speed.

Due to its extreme nitro ability offset by its poor handling and low top speed, the Villain Wheels would have likely dominated mainly on tracks without hard corners, and/or on tracks with decent nitro supply, such as Barcelona or French Guiana. Its highly restrictive availability in events aside, its likely rivals in Multiplayer League would have been the Honda Integra Type-R, ED Design Torq, and BMW M2. Applying Nitro Starters and Extra Tanks could help mitigate the Villain Wheels's low top speed, assuming that the driver was able to keep nitro active throughout the entire race.

The Villain Wheels was only available for use in its own time-limited MP cup, as well as two TLEs featuring it. It cannot be legitimately obtained and is not available for use by the player in any other way.[1]

As of the 2018 Spring Update, the Villain Wheels' manufacturer icon has been removed from the Brand Filters, making the car completely unavailable, although the car's data is still in the game's files.