Asphalt Urban GT 2
Dubai (Arabic: دبيّ Dubayy) is a race track in the Asphalt series; in real life, it is the largest city of the United Arab Emirates (UAE).

Dubai was added in its namesake update and has four race track variants:

In cases where a vehicle with weak handling has to be used, the longer aquarium route can be used to reach the barrel ramp / shorter route unless the player is skilled in utilizing the drifting mechanics of the game.

Vehicles with excellent handling, drift radius and acceleration are recommended for the track's multiple tight corners and short length.

The following vehicles have their banners depicted in Dubai:

A shot of Dubai Marina (text not included).

A Ford Shelby GT500 knocks down an Aston Martin V12 Vantage in the Aquarium. A BMW M6 can also be seen.

An infected Audi S4 driving through the Aquarium in Dubai.

An Audi RS 4 Avant having crossed the finish line in Dubai.

A pre-race shot from within the Aquarium's tank.

A high-altitude view of Dubai Marina.

One of the track's sharpest turns.

A pre-race shot of Dubai with the Burj Khalifa in the backdrop.

A shot of the Atlantis the Palm Resort with the Burj Khalifa in the background.

A pre-race shot featuring what appears to be an approaching dust storm.

A pre-race shot of the Shopping Center.

The indoor entrance to the Aquarium. 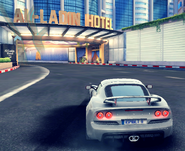 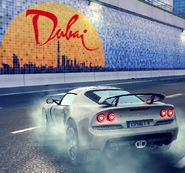 A mural of Dubai

An infected Lamborghini Urus racing in the Aquarium in Dubai Reverse.

Some of the new architectural developments in Dubai. 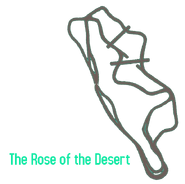 A McLaren P1 performing multiple knockdowns on other McLaren P1s in The Rose of the Desert.

A pre-race shot of Dubai with the Atlantis The Palm hotel in the backdrop.

The track having the most twisty curves in the gameplay. Players there need to face a half-hairpin connects to the harbour with a straightaway, then a “M” curve located at the centre straight to another straightaway connects to a hairpin with a shortcut at the factory area. After all, run through another hairpin at the city centre and straight to the finish line after passing a viaduct.