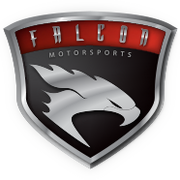 Falcon Motorsports is an American manufacturer of high performance automobiles, most notably the Falcon F series Falcon F5 and Falcon F7. The Holly, Michigan based company was founded in 2009 by American automotive designer and engineer Jeff Lemke.

A prototype was first shown to the public at the 2010 Detroit International Autoshow. In 2012, the company then publicly unveiled and presented the production version to the international automotive press, named Falcon F7, which represented the company's inaugural vehicle. The F7 is a mid engine rear-wheel-drive two seat sports car with a monocoque chassis built from aluminum, carbon fiber and Kevlar. In its base configuration the car is powered by a naturally aspirated 427 cubic inch all aluminum dry-sump V8 (LS7-derived), delivering between 620 and 680 hp which enables the 2,750 lb. car to accelerate from a standstill to 60 mph in 3.3 - 3.6 seconds.