MULTIPLAYER CHALLENGE
Enter the arena in this new one-on-one racing mode! Each victory will increase the size of your reward, so keep winning to unlock the Grand Prize! But lose 3 races, and your run is over!

FERRARI F8 TRIBUTO SPECIAL EVENT
Participate in the Ferrari F8 Tributo special event this season and be one of the first to drive away in this ode to elegance.

FERRARI 599XX EVO GRAND PRIX
Compete in the Grand Prix to lay your hands on this masterpiece. 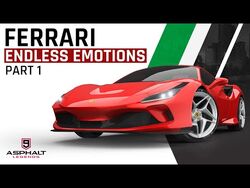 Retrieved from "https://asphalt.fandom.com/wiki/Ferrari_Season_Update?oldid=408642"
Community content is available under CC-BY-SA unless otherwise noted.