French Guiana is a medium-length track (with the reverse track named Fr. Guiana Rev.), inside the Guiana Space Centre, which is operated by real-life entities such as the ESA, CNES, and Arianespace, as well as the fictitious Abelion Corporation. A track that is 3.342 mi (5.381 km) long, it is apparently filled with a space port theme, evidenced by the abundance of rockets in the track. The Ariane 5 rocket is shown standing on its launchpad and is emblazoned with the flags of the ESA member countries. At the beginning of the regular track, there are two ramps that allow players to fly past the rocket, although it is not advisable to do so until the second lap, as jumping past the rocket poses an extremely high risk of wrecking. In both tracks, the rocket eventually blasts off into space, but the timing for this event is different: on the regular track, the rocket blasts off at the beginning of the second lap, while on the reverse track, the rocket blasts off when the player is about to drive through it for the first time. The rocket is never present in Gate Drift events set in French Guiana. In the Career mode, the rocket may actually blast off at the beginning of the race instead.

After exiting the hangar there is a set of two intertwining roads inspired by a similar South American road system where players jump from one to the next, collecting large amounts of nitro; it is also a common wrecking place if when switching from the lower to higher road your car goes sideways and crashes between the road and the wall. Towards either side of this track section is an array of satellite dishes and observatory buildings akin to those seen at the Llano de Chajnantor Observatory's Atacama Compact Array.

Near the end of each track in French Guiana is a long runway that eventually splits into half. On this runway are the biggest dangers of the race: gigantic moving crawlers that are present in odd-numbered laps, regardless of the game mode chosen. However, on the second lap, the crawlers are replaced with a Space Shuttle flying above the runway. In multiplayer, caution is recommended as the crawlers appear on every lap; on the first lap, the crawlers will start to move onto the runway and will begin to move out of the runway on the second lap.

At the end of the race, the track goes through a small jungle.

There is no traffic in French Guiana, regardless of the number of racers in the race, which makes it a smoother track than most others.

The following vehicles have their banners depicted in French Guiana:

The Brazil track in Asphalt Nitro reuses French Guiana's track layout, but has the same starting point in the reverse track as on the forwards track.

A Peugeot SR1 jumping through the Ariane 5 launch site.

An Audi RS 4 Avant performing a Drifting Knockdown on a Lotus Exige S Coupe in the warehouse.

A Scion FR-S having wrecked in French Guiana, presumably as a result of failing to cleanly jump through the Ariane 5 launch site on the first lap.

A Chevrolet Camaro GS with Extra Tank on the French Guiana runway in the second lap of an Infected race.

A TRION NEMESIS after a race in French Guiana.

A Lamborghini Aventador SV wrecking as a result of running straight into a crawler.

The Ariane 5 Rocket prior to lift-off.

The Ariane 5 Rocket lifting off.

A billboard for Asphalt 9: Legends, placed at the base of the in-game version of the Changi Control Tower. 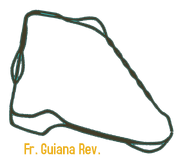 Two of the gigantic crawlers that sometimes cross the runway.

The satellite array that is found on the winding track section of Guiana Space Center.

A secondary shot of the satellite array.

A shot of the launch pad containing the Ariane 5 rocket.

A shot of the jungle in French Guiana.

A secondary shot of the jungle in French Guiana.

The tunnel portion of the track.