The Heatwave Season Update is the 20th update for Asphalt 9: Legends.

Celebrate Asphalt 9's third anniversary! Feel the racing heat on a new track inspired by the design of real motorsport circuits and chase 7 fabulous hypercars in new events and a grand prix

Grab the Legend Pass to unlock the McLaren Elva, exclusive content, and other benefits!

7 NEW SUMMER DEVILS
This season brings with it no fewer than 7 powerful new cabriolets to race under the beating sun! Among them is the Lamborghini Aventador SVJ Roadster and the McLaren Elva.

SPECIAL EVENTS & 3-YEAR ANNIVERSARY
Celebrate with us in an anniversary event and a very special "Burst of Speed"! The Unleashed event is back too, as well as special events to get your hands on the Hennessey Venom F5 and the Bugatti Veyron Grand Vitesse.

GRAND PRIX
The rarest gems to add to your collection this season are the Lamborghini SC20 and the Pagani Zonda HP Barchetta. Prove your worth and get them in the Grand Prix!

ESPORTS COMPETITIONS
Buckle up for new and ongoing competitions this summer!

- Included in the Special Event Tab 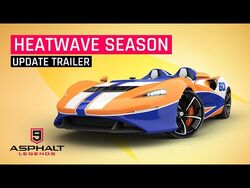