The Hennessey Venom GT is among one of the fastest vehicles in the Asphalt series.

The Hennessey Venom GT is a limited-production supercar made by Hennessey Performance and built on a heavily-modified Lotus Exige chassis. It served one purpose: to break the world record for the highest speed in any regular production land vehicle (270.49 mph / 435.49 km/h). Unfortunately, it did not make the record in 2013 as the run was done in a single direction and only 29 Venom GTs were produced.

The Hennessey Venom GT is the third most expensive vehicle available for purchase by credits, costing

As of the San Diego Harbor update, the Hennessey Venom GT has its own event in Season 6. This event is the singular most expensive event ouside of Season 9 (not counting the events that require Premium cars), requiring 2,250,000 Credits to participate for the first time (if the player doesn't have the car already).

The Hennessey Venom GT reappears in Asphalt Overdrive, this time clearly being the most powerful car in the game, only beaten by the Lamborghini Sesto Elemento (reprising its role as the most powerful car in an Asphalt game), with a starting rank of 1581 and a max rank of 1746, and also placed at the high end of Turf 5. Prior to the first update for the game, the Venom GT's starting rank was 1,561. Its bonus is that its Roll Cage adds x1.50 Bonus to your takedown score. It is also the most expensive car in-game - costing 1,250 gold to be purchased. 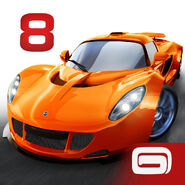 Add a photo to this gallery
First three photos were taken from "Justin Washington's" Google+ archive. Prior to the cars release.

AI Venom GT in the Class S Cup, knocked down by a player's Bugatti Vitesse.

Its stock infected speed in mph.

A km/h display for its stock infected speed.

|A maxed out Hennessey Venom GT.

Retrieved from "https://asphalt.fandom.com/wiki/Hennessey_Venom_GT?oldid=29401"
Community content is available under CC-BY-SA unless otherwise noted.