The Honda Civic Type R  is the highest performance version of the Honda Civic made by Honda Motor Company of Japan. It features a lightened and stiffened body, specially tuned engine and upgraded brakes and chassis. Red is used in the badge interior to give it a special sporting distinction and to separate it from other Honda models. In Japan, there is a one-make series of Honda Type R cars where a privateer can purchase an off-road Type R and compete in a series championship, which is a stepping stone for many aspiring racing drivers.

In September 2012, there were rumours about the confirmation of the next-generation Honda Civic Type R at Paris Motor Show. A preview didn't take place until the Geneva Motor Show in March 2014. It was revealed as the first factory turbocharged Civic Type R.

The engine is manufactured at Honda's Anna Engine Plant in Ohio before being exported to the UK. 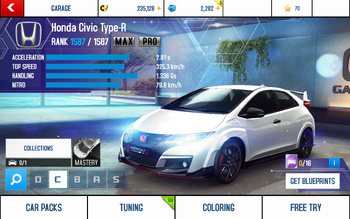 Despite the Honda Civic Type-R's high nitro boost and good nitro efficiency, the Civic's maximum speed, at MAX+PRO with level 3/perfect nitro active and without a Tuning Kit applied, is only 251.6 mph (405.1 km/h), making it 1.4 mph (2.3 km/h) slower than a MAX+PRO Renault Alpine Celebration, which is itself slower than the Mercedes-Benz CLA 45 AMG Racing Series, Nissan 370Z Special Edition, Sbarro Sparta and Maserati Alfieri.

The Honda Civic Type-R also accelerates, handles and drifts worse than the Renault Alpine Celebration and Nissan 370Z Special Edition (although its cornering and drifting ability is better than the Mercedes-Benz CLA 45 AMG Racing Series's, Sbarro Sparta's or Maserati Alfieri's) and its high nitro boost is countered by its much lower top speed—without factoring in nitro, the Civic is a whopping 19.6 mph (31.5 km/h) slower than the Alpine. On longer maps and on tracks where nitro management is crucial, such as Tokyo, the Civic cannot beat an Alpine or 370Z SE at a similar rank unless the driver of the Civic is extremely skilled at snaking. On more technical tracks, such as Dubai or Sector 8, the Alpine and 370Z SE's greater speed and acceleration, as well as its better handling and drifting, means that they will usually beat the Civic unless if they wreck and the Civic does not.

This is the official review of the Honda Civic Type-R on the Asphalt YouTube channel, made by ASL_Tae Hwan Kim and published on December 7, 2017:

Final verdict: "Honda Civic Type-R is a great car for its rank. It has a great acceleration and nice handling (considering its nitro stats). Plus, its awesome nitro duration will help you finish a lap without using Extra Tank on many tracks. But its low top speed and wide drift radius make it inferior to the Renault Alpine and Sbarro Sparta."

The Honda Civic Type-R is even less suitable for Multiplayer League races compared to a similarly-ranked Renault Alpine Celebration, Nissan 370Z Special Edition, Mercedes-Benz CLA 45 AMG Racing Series or Sbarro Sparta, due to it having no distinct advantages over any of them apart from its slightly superior nitro efficiency. Exacerbating this is that, due to its starting and MAX+PRO rank, any potential multiplayer tune puts the Civic in direct competition with the Audi R8 e-tron Special Edition in addition to other multiplayer favorites, such as the BMW M2 between ranks 1100-1350, Shelby Cobra 427 between ranks 1200-1300, Mercedes-Benz SLK 55 AMG Special Edition between ranks 1250-1600, TVR Sagaris between ranks 1300-1400, Chevrolet 2016 Camaro SS between ranks 1300-1500, and a combination of the McLaren Mercedes MP4-25, SIN R1, BMW 3.0 CSL Hommage and Aston Martin Vulcan at ranks above 1500. For this reason, the Civic is a poor choice for multiplayer league regardless of its tune.

The Honda Civic Type-R performs decently in Events. Although the introduction of the Maserati Alfieri means that it is highly unlikely to place within the top 5000 in events, the Civic's performance at MAX+PRO is still superior to most other vehicles in its class, making it an adequate choice if the player does not own any of the other high-end Class C vehicles. It is also usually one of the better vehicles in events where it is featured, particularly in C-Class Cups, where its main competition is usually only the Mercedes-Benz CLA 45 AMG Racing Series.

35, the second highest in all of Class C, behind the McLaren M14A's

100 instead. The Civic's Season 9 race, set in the newer Munich Subway track, is suitable for farming

, with its moderate length awarding a decent amount of

The Honda Civic Type-R can be assembled after collecting 16 of its Rare-rarity BP cards. Assembling the Civic takes 5 hours but can be skipped for up to

Initially, the Honda Civic Type R was one of three

only upgrade cars that were added in the Munich Update; this was subsequently changed on October 31, 2017 to allow for payment of upgrades via

As of the Sixth Anniversary Update, the car no longer requires Blueprints to be assembled and has a full purchase price of

As of the 2019 Spring Update, upgrades cost

The Honda Civic Type R's Championship was released as the 12th Championship event after the Arash AF10's R&D and Falcon F7's EDD event on December 1, 2017. Players are given 10 days to complete the event.

The event was revived on May 30, 2019, as part of the 2019 Spring Update's Asphalt Moments Series but the car is only awarded after completing all Grand Finales.

Retrieved from "https://asphalt.fandom.com/wiki/Honda_Civic_Type_R?oldid=387763"
Community content is available under CC-BY-SA unless otherwise noted.