Hunted is a race mode in Asphalt 9: Legends.

Hunted is a race mode where there are Cops chasing the player, hence the name “Hunted”. In order to win, the player must finish the race within a time limit, similar to Time Attacks. In addition, the player must avoid wrecking, as it will cause the player to be “Busted”. When busted, the screen will turn red, and the words “Busted” will cross the screen in an X pattern and a flashing police badge will appear in the middle of the screen. There are many variations of tracks made specifically for Hunted races, such as in Scotland, Cairo, and the Himalayas.

In order to win, the player must finish within a time limit and must not wreck. Police cars will spawn throughout the track and will immediately give chase when you get near. Unlike normal cars, police cars cannot be knocked down with single-tap, double-tap, or perfect nitro. The player must land on the police car, make contact with it in mid-air, do a 360, or ram it with a nitro shockwave. Near the end of each Hunted race, there is a small police blockade that contains destroyable roadblocks and two large signs that tell the player to stop (also destroyable). At that point, all police vehicles will slow down and stop. After that; a larger, indestructible police blockade appears, along with the finish line right behind it. There are two ramps to jump or barrel roll over. Hitting the blockade will cause the player to wreck.

A sedan with police lights, sirens, police livery, and a bull bar. Are the most common police vehicle in Hunted races. Resembles a Ford Crown Victoria police car.

A large SUV with the same modifications as the police car. Are not as common as police cars, but will still appear in the race mode. Resembles a Ford Expedition.

A large van with a roof mounted turret (does not fire bullets), off-road tires, and modifications of the police car and SUV. Despite the size and appearance, they are only as durable as the police cars and SUVs, cannot wreck players directly, and rarely appear in the race mode.

Does not play a large role in Hunted races but can still be a hazard. Police helicopters cannot be knocked down and will wreck a player if the player comes in contact with the helicopter. Resembles a Bell 204 chopper. 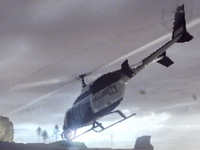 Retrieved from "https://asphalt.fandom.com/wiki/Hunted?oldid=385754"
Community content is available under CC-BY-SA unless otherwise noted.