Iceland (Icelandic: Ísland) is a Nordic ocean country located between the North Atlantic and Arctic Ocean. It also serves as a race location in the Asphalt series.

Iceland takes the form of Nevada from Asphalt 8: Airborne, but in a heavy snow theme. The first shortcut is actually much harder to execute correctly due to it being on ice, which causes cars to handle worse than normal. Also, Iceland lacks one shortcut compared to Nevada.

Iceland serves as the tutorial track of the game, where the player learns the basics of the game on the track with a Ferrari 458 Italia (Dodge Dart GT prior to Enduro Update). Iceland is a long-length track, although the tutorial stops before the path branches where one of the routes is into a cave (with further path branching). Iceland is also where the first Versus and Infected races occur, both of them being in Season 1. Iceland is the original track with the most routes.

Iceland is a very twisty and long track, lasting as long as 4.524 mi (7.280 km). It features sharp curves that, coupled with the beautiful and various scenery and confusing ramp placement, can throw off the unaware racer. The track has a lot of alternate routes that go into caves, near the docks, and through the ice-capped landscape of Iceland. At one point in the track, an avalanche occurs, decreasing forwards visibility for a limited period of time. The set of hairpin curves at the beginning of the track also appear in Azure Coast, but scaled down. The caves are used by Sturluson Mining, a fictional mining company. Geysers also appear in some parts of the track.

In Gate Drift, provided the race lasts 3 minutes, it is possible to earn 80,000 points on this track, but a car like the Porsche Carrera GT or BMW 3.0 CSL Hommage must be used in order to maximize the amount of points earned.

The following vehicles have their banners depicted in Iceland:

A McLaren P1™ in Iceland's caves during Christmas season.

An Arash AF10 after a race in Iceland.

The white sign has directions to Reykjavik. The blue sign shows that this part of Iceland is based in Vatnsdalsvegur (722).

A shot of the lighthouse and the shipping docks during the Christmas Season.

A secondary shot of the lighthouse with hot air balloons in the background during the Christmas Season.

Icelandic waterfalls during the Christmas Season.

A lone cabin on top of a hillside near the track. Note the Christmas tree in the background.

The top sign is a warning for falling rocks. The bottom sign reads 'Stans Veggjald, 5.2 km' which translates to 'Stop - Toll Fee, 5.2km'. 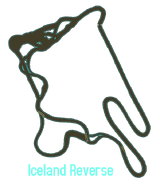 A McLaren P1™ after a race in Iceland Reverse.

One of Iceland's most slippery sections of track during the Christmas Season.

A shot of a cabin on top of a hillside by the track. Note the Christmas tree in the background.

The track is identical in layout but has additional visual detail for the track's scenery.

The track starts in a snow-covered village and goes through an industrial area, an active volcano and icy caves. The track has long straights with a mix of long and sharp turns. The village section before the finish line has a slalom with 4 turns.

There are no variations in time of day on this track, regardless of whether the variant is regular or reverse.

The volcano section of the track.

The town of Reykjavik. The Northern lights can be seen in the background.

A Ferrari 430 Scuderia in the ice cave. 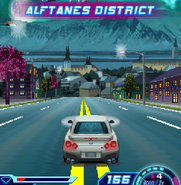 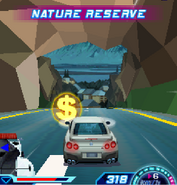 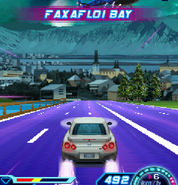