Kawasaki is a Japanese motorcycle manufacturer that appears in the Asphalt series.

The company is named after its founder Shōzō Kawasaki and has no connection with the city of Kawasaki, Kanagawa. Shōzō Kawasaki's original main base was the city of Kobe, Hyōgo. Even though it originally started out as a shipbuilding company, its most visible consumer product lines are its motorcycles and all-terrain vehicles, although the company and its subsidiaries also manufacture personal water craft, ships, industrial plants, tractors, trains, smallengines, and aerospace equipment (including military aircraft). Subcontract work on jet aircraft (including jumbo jets) has been done for Boeing,Embraer, and Bombardier. The company is one of five major Japanese companies contracted to build parts for Boeing's 777X aircraft. 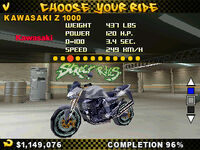 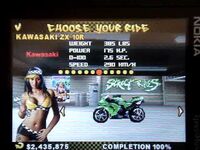 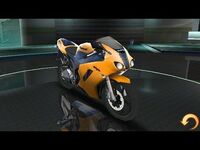 The Kawasaki ZX-6R in Asphalt 5.
Add a photo to this gallery
Retrieved from "https://asphalt.fandom.com/wiki/Kawasaki?oldid=335107"
Community content is available under CC-BY-SA unless otherwise noted.