The Aventador's shape, as previously mentioned, draws strong inspiration from the Reventón and Estoque concept cars, while overall having a similar wedge shape to the Lamborghini Murciélago it replaced. The rear air intake slats are now in a different shape, and the headlights are a shorter version of those of the Estoque. Lamborghini claims a dry weight of 3472 lb (1575 kg), although the real car is much heavier, especially with all fluids and a full tank. European spec models have a weight of 3817 lb (1731 kg),[1] while US spec models are much heavier, with 4085 lb (1853 kg).[2] This results in a power-to-weight ratio of 372 hp (277 kW) per tonne or 5.92 lb (2.69 kg) per horsepower.

Power is delivered to all four wheels via a seven-speed single-clutch semi-automatic transmission built by Graziano Transmissioni, which achieves gear shifts in 50 milliseconds despite being single-clutch. The new, electronically controlled AWD system is developed and supplied by Haldex Traction, offering traction and handling capabilities based on their fourth-generation technology.

Production was initially planned to be limited to 4,000 units, although Lamborghini eventually built its 5,000th Aventador in 2016. The base price of the Aventador starts at US$394,000.

Shortened to Lamborghini Aventador LP700-4 (without the space between "LP" and "700-4"), it appears as a Class S car added in the Graphics Update.

The Lamborghini Aventador LP 700-4 was made playable in the fourth update for Asphalt Nitro, despite having already been available in the game since the third update.

The Lamborghini Aventador LP 700-4, now appears as a Class S car. It otherwise behaves exactly the same as its Asphalt 8: Airborne rendition. It mainly rivals the Koenigsegg One:1 again, due to the Ferrari 330 P4 having been pushed back in performance and rank.

The Aventador's closest rivals are the Mercedes-AMG C 63 Coupe Touring Car 2014, Peugeot Onyx, and Koenigsegg One:1.

The Aventador LP 700-4's acceleration is inversely proportional to its speed at speeds 62 mph (100 km/h) below its maximum total speed – its acceleration decreases as its speed increases, to the point it reaches top speed in a noticeable amount of time after the Ferrari 330 P4, TVR Sagaris Special Edition, McLaren Mercedes MP4-25, Rezvani Beast Alpha, and Audi R8 e-tron Special Edition. It still posts a high rate of acceleration as mentioned previously, though, with the ability to hit total speed at MAX+PRO with a Tuning Kit in 3.6 seconds. The LP 700-4 has a maximum total speed of 297.3 mph (478.7 km/h), although the Ferrari 330 P4 can pull off the same total speed at a lower rank but with better overall performance.

The LP 700-4's biggest disadvantage is its low nitro efficiency; this may perhaps be a performance trait based on the previous games' version of the Aventador. Even at MAX+PRO, this makes its driver mostly incapable of taking advantage of the faster boost a Level 3 Nitro provides because of how quickly the nitro depletes, requiring the use of a more-efficient Perfect Nitro that otherwise provides the same boost of speed as a Level 3 nitro.

In fact, if not for its abysmal nitro duration, the Aventador LP 700-4 would be nearly identical to the McLaren 675LT and 9FF GT9 VMAX in terms of performance.

The Lamborghini Aventador LP 700-4's handling, while not bad by any means, is not the best in its class, although the Aventador LP 700-4 does have a somewhat sharp drifting radius that helps it clear difficult corners without too much trouble. The car, weighing 3472 lb (1575 kg) in the game, does have an above-average steering capacity, enough to handle the S-bend curves of The Great Wall.

The Lamborghini Aventador LP 700-4 has no use whatsoever in most Time-Limited Events thanks to being superseded by the McLaren 675LT and later cars like the aforementioned McLaren Mercedes MP4-25 and BMW 3.0 CSL Hommage. On the other hand, there are some events that may feature mid-high-end Class A cars, and the Aventador is always featured as the dominant car in those events even though the Sbarro Alcador and Chevrolet Corvette C3 have a higher rank and slightly higher total speed; this is due to the Alcador and C3 having much worse overall stats than the Aventador, especially in acceleration and handling. The Aventador is still the best car available for Lamborghini events, though, provided the player does not have all the necessary Blueprints for the Lamborghini Egoista and Lamborghini Aventador SV, although players can obtain free BPs for the Egoista by watching ads, as well as lacking the Lamborghini Centenario LP 770-4 due to the extreme difficulty of its R&D. While the 330 P4 is superior, it had a problem of being a tokens-only car until March 23, 2018, and it would be better for the player to save tokens and V12 Engine cards for better cars like the Aston Martin Vulcan or Apollo Intensa Emozione (if the player obtained the latter through its R&D event but doesn't have enough free upgrades to max out the latter without spending as many tokens as possible).

The Aventador LP 700-4 was featured in the Enduro Double Down events for the Weber Faster One and Zenvo ST1. For more information, see these EDD pages for the Weber and Zenvo.

11,250 to purchase as of the Fifteenth Anniversary Update. The Aventador Coupé had an original buying price of

4,750. It is part of the 30th and 37th Multiplayer Seasons, Holiday Rush Season 3 and Grill Season respectively, as an Elite League reward. Players who already own the Aventador LP 700-4 would win

During the price changes in the Munich Update for new accounts created after November 13, 2017, the Aventador Coupé's price was

The Aventador Coupé is obtainable for reaching Tier 14 with the Premium upgrade in the Lamborghini SC20 Festival. Players who already own the car would win 7x

The Aventador Coupé is obtainable for a second time for reaching Tier 14 with the Premium upgrade in the Lamborghini Countach LPI 800-4 (Festival). Players who already own the car would win 8x 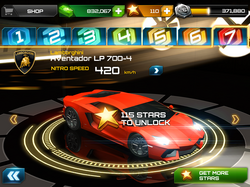 The Lamborghini Aventador LP 700-4 appears as a Tier 7 car. It requires 115 stars to be unlocked and requires

The Aventador can be described as one of the worst cars in its Tier; with it having the slowest total speed in its tier, slower than the Ferrari 288 GTO and RUF CTR 3, the Aventador cannot capitalize on its superior acceleration to beat faster threats. Its handling and drifting radius is additionally undermined by its large hit-box, as it is larger and wider than most cars in the game, making it ponderous to drive in narrow or sharp corners. While the Aventador can be useful in Career Mode early on thanks to its strong acceleration, it has no use in Multiplayer, as its speed tier is too low to compete with any other Tier 7 car despite being able to outrun all of them, except the 288 GTO, at the start of a race; the Aventador's total speed isn't even high enough to allow it to hold the lead on shorter tracks where it excels most. The Aventador thus is not recommended for purchase; despite possessing noteworthy acceleration, its low total speed means that any other Tier 7 car, with the possible exceptions of the RT 12 S and the 288 GTO, can easily beat it. As Tier 7 is the last tier unlocked in both Career and Multiplayer, and with the impending unlocks of significantly better vehicles at this point, it is a generally a better option to rent late-game Tier 7 cars, such as the RUF CTR 3 or the Bugatti Veyron 16.4 Super Sport, with significantly better potential performance, than to purchase and upgrade the Aventador.