Lamborghini unveiled the Murciélago LP 640 at the 2006 Geneva Motor Show. The new title incorporated the car's name, along with an alphanumeric designation which indicates the engine's orientation (Longitudinale Posteriore), along with the updated power output of 631 hp (640 PS; 471 kW) and 487 ft·lb (660 N·m), which the V12 engine produces due to its higher displacement of 6.5 L (6,496 cc; 396.4 cu in). Updated from the original naming convention first used by the Lamborghini Countach LP 400, this updated naming convention would be used for the vast majority of Lamborghini's cars going forward, with the 2016 Lamborghini Centenario LP 770-4 being the last one to use such.

The exterior received a noticeable facelift, featuring revised front and rear fascias, and asymmetrical side air intakes, with the left side intake feeding an oil cooler. A new single outlet exhaust system incorporated into the rear diffuser, modified suspension system, revised programming and upgraded clutch for the 6-speed "e-Gear" automated sequential transmission with launch control rounded out the performance modifications. Interior seating was also re-configured in order to provide greater headroom, and a new stereo system formed part of the updated dashboard.

Named as the Lamborghini Murciélago LP640 (with no space between "LP" and "640"), it was added in the Holiday Update as a high-end Class B car with the following statistics:

The Murciélago LP 640 has an underwhelming real total speed of 287.1 mph/462.2 km/h for its rank, and its acceleration is rather underwhelming too, reaching that speed in 3.96 seconds. The Murciélago LP 640 also features a mediocre nitro efficiency of 9/12.5/16 as well as a wide drifting radius. This car requires micro-drifting or drift punching to take sharp turns and hairpin turns featured in tracks such as Azure Coast and Transylvania.

In overall performance, the Murciélago LP 640 is much closer to the Zenvo ST1, McLaren 650S GT3, Mercedes-Benz SLS AMG Coupé Black Series, and SCG 003S. It is currently the fastest Lamborghini car in Class B, beating the Lamborghini Estoque.

With its performance shortcomings, a small stock-to-MAX+PRO rank difference and its difficult Championship event, the Murciélago is unsuitable for Multiplayer.

1,900,000 from the 2020 Halloween Update onwards. It was previously available for purchase at

The car was on sale for a limited-time during the following dates:

The Murciélago LP 640 is obtainable for reaching Tier 8 with the Premium upgrade in the Lamborghini SC20 Festival. Players who already own the car would win 7x

? while Pro Kits require 15 of each Rare component card, 60 Rare engines & techs each, and 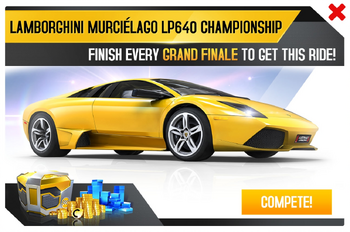 Shortened just to Lamborghini LP 640, it appears as a playable vehicle and is the cover car of the game.