London is the largest city and the capital of the United Kingdom that is featured as a race track in the Asphalt series.

On the regular version, the race begins halfway across Westminster Bridge facing westbound (eastbound on the reverse version). On The London Eye track variant, the race begins facing southbound just before Buckingham Palace.

On the latter two tracks, the weather is set to a rainy day. London first appears as the location of Race 2 in Season 2: More Than Racing. The London track is 3.551 mi (5.715 km) long, while the two mini-tracks are much shorter.

London is rendered as a much scaled-down version of its real life counterpart, while still featuring many of the world famous landmarks found throughout the actual city in which the various tracks of the game pass through, such as :

The landmarks can be viewed in the Gallery Section below. The following cars have their banners depicted in London:

A Scion FR-S having wrecked during a race in London (before the second tunnel).

A Felino cB7 after landing on an SRT 2013 Dodge Challenger SRT8 in London.

A Koenigsegg One:1 after a race in London.

The in-game version of Buckingham Palace.

Gameloft's logo can be seen as the crest on the Palace Gates, thus owing to the building's unofficial name 'Gameloft Palace'.

A shot of the Victoria Memorial that is located in front of the in-game version of Buckingham Palace.

A secondary shot of the Victoria Memorial.

A shot of London's Tower Bridge.

A shot of London's Trafalgar Square.

A shot of Big Ben and the Palace of Westminster as seen from just above Westminster Bridge.

A shot of Westminster Abbey.

A shot of the in-game version of London's City Hall (the tall blue building on the right).

Pre-race screen featuring the Tower of London on the left.

One of London's many iconic Royal Mail Post Boxes.

A shot of London's Piccadilly Circus.

One of London's streets near Piccadilly Circus. 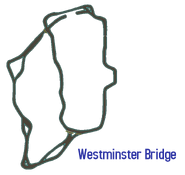 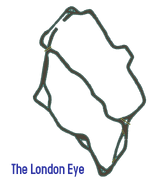 The reverse side of the London Eye

A post-race shot of The London Eye with a McLaren P1™ GTR firing the Perfect Nitro after winning an Elimination race.

In Asphalt 7, the London track is set at night time with some fireworks at the beginning of the track. It is recommended to drift at the first sharp turn.

This added track starts on the London Bridge. Pass a hairpin and go straight at the Avenue. Then a tiny curve with 2 corners on the left. A half hairpin with puddles and a shortcut appeared after all. Go straight and turn left to reach the bridge again with the start/finish line.

London was only available in the Java version of the game.