The Munich Subway or the Munich U-Bahn (German: U-Bahn München) is a track in Asphalt 8: Airborne.

The location is presumably set in the U1 line of the Munich Subway.

The following vehicles have their banners depicted in Munich Subway: 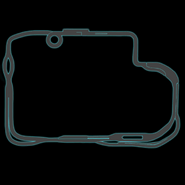 A pre-race shot of one of the Subway's trains in the old grey color scheme.

Angry Birds/Asphalt 8 graffiti in the Subway

The changed color of subway trains in Munich Subway

The Ferrari FXX Evoluzione after a race in Market Square