The Munich Update is the 23rd update for Asphalt 8: Airborne. Released on October 23, 2017 for all platforms, the Munich Subway track was introduced.

The latest update of Asphalt 8: Airborne carries with it the duty to fulfill two celebrations of season. Not only does it deliver new vehicles, but it also lets you show your love for Halloween and Oktoberace. Get ready for a Very Special and Spooky event and a new track on Update 23!

NEW LOCATION
Experience a breathtaking ride through the sunny streets and dark underground of Munich in limited time events, multiplayer, and all new special events!

TRICK OR RUN!
Asphalt 8 celebrates the launch of its new track located in Munich with what we affectionately know as "Oktoberace"! Celebrate this Oktoberace by entering limited events, multiplayer races and new special events throughout the month (and beyond).
For those hoping to celebrate the witch season, the Asphalt team has a spooky event! Beat and escape the Jack-o-Lantern monsters on two themed tracks at this Halloween Special Event.

UNIQUE MOTO BLITZ SEASONS
In addition to the mind-blowing new bikes, check out the special new seasons and masteries featured in MOTO BLITZ.

BRAND-NEW CHAMPIONSHIPS
Check back often to beat the Final Races and grab their exclusive new rides. Collect all Trophies for pro upgrades and other goodies.

SPECIAL EVENTS SERIES
5 new special events are waiting to be conquered by you! Don’t miss your chance to compete and win cool prizes.

iOS 11 SUPPORT
The game now supports the latest operating system and their most recent iterations of hardware products. 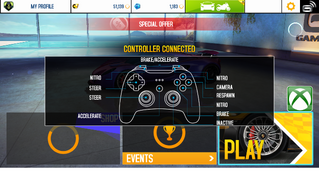 The following bugs/glitches have been fixed: