The Neon Season Update is the 54th update of Asphalt 8: Airborne.

NEON IS THE NEW BLACK
Make your experience neon bright thanks to the Neon Season. This thematic season will bring you the Season Pass, new event, cars, avatars, music, and much more! Buckle up and lost yourself in the neon lights of Asphalt 8.

DON'T PASS UP THIS SEASON PASS
Here's something really new to the game-the Season Pass, a new way of getting extra rewards while racing at your own pace! Race, improve your Season Pass level, and get top-notch rewards!

MEET THE ULTIMATE UPGRADE!
The awesome new Ultimate Upgrade is here! Instantly upgrade any of your vehicles to the fullest. Play more to get this exclusive item, and find the special icon in the Garage to max out your vehicles!

LOOK FOR MORE REWARDS
More rewards are coming! And it's never been easier to get them all! Look for the special icons throughout the game and get your rewards! 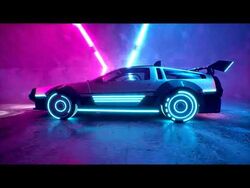