Nevada is a state in the United States, located in the southwest, bordering California, Arizona, Utah, Oregon, and Idaho. It appears as a race track in the Asphalt series.

Nevada uses the same layout as its Asphalt 8 rendition but with increased graphical fidelity.

The long straight section from the asphalt to the bridge is all considered rough terrain and the player's car will lose speed if nitro is not used. With Asphalt 9's vehicle physics, wallriding tighter corners will be better for cars that have poor handling than to drift through it.

The Nevada tracks take their track layout from the London tracks, but all three track variants, Nevada, Sleeping Wings, and Water Barrier, now have reverse variants:

The following tracks are based on Asphalt 8 London tracks:

The dam, wind turbines and several military transport aircraft are featured across various parts of the track.

Pre-race screen. The miltary transport aircraft appear to be very loosely based on the Airbus A400M Atlas. 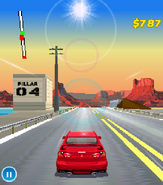 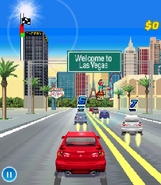 This location is in the Nevada-Arizona desert, with an appearance of the world-famous Hoover Dam landmark, parodied as the Clover Dam, which spans across the border of these two states. A short distance away from the dam lies the in-game rendition of the Mike O'Callaghan–Pat Tillman Memorial Bridge. It is the first track in the game, even though the tutorial takes place in Iceland.

Both tracks are the same course, the differences being the direction of travel and the lack of one shortcut in the reverse track – the starting point is the same.

The following vehicles have their banners depicted in Nevada:

Social media promo image of the Old Spice x Asphalt 8: Airborne marketing campaign with the tunnel in the background

The Last Chance Gas Station located near the Start Line on both versions of the track.

The reservoir side of the Clover Dam.

The Clover Dam in its entirety.

One of the track's sharpest turns.

The floodgate side of the Clover Dam.

The stretch of road where the Start Line (not visible) is located.

The inaccessible bypass bridge near the Clover Dam.

The orange sign warning of the twisty road ahead.

A billboard for Asphalt 9: Legends, as seen near the in-game version of the Mike O'Callaghan–Pat Tillman Memorial Bridge.

The rare glitch where an AI racer places 1st in ~20 seconds.

An alien sign at the entrance of the tunnel

The wreckage of a 1948 GMC 100. The Clover Dam is in the backdrop and above is the inaccessible bypass bridge.