Asphalt Wiki
Register
Don't have an account?
Sign In
Advertisement
in: Locations, United States of America, North America,
and 6 more

The track is identical in layout but has two additional shortcuts with one at the harbor section and the other at the straight S bend.

The track consists of an S bend at the start followed by a straightaway that leads to a second S bend. A second straightaway ends with a sharp corner and the Brooklyn Bridge is crossed before the start/finish line.

Cash pickups rarely appear at the S bends while nitro pickups are present on the straightaways.

The track consists mostly of straightaways and tight corners. The first section starts with a medium corner and goes through a small park with an arch that serves as a fixed obstacle. A long straightaway opens up with a split path before 2 sharp turns at the end of the first section. The second section runs underneath an elevated subway line with 2 straightaways and a long curve before entering the third section. The third section is a park with multiple tight corners and connects to the start/finish line with a high-speed shallow curve. A shortcut is present in the park and has a cash pickup while the main path has 3 cash pickups but with 2 sharp corners.

The track is identical in layout to the Asphalt 6 version but has additional shortcuts and visual detail for the track's scenery. The first straightaway now has the underground parking garage and a jump through the split path as shortcuts while the second straightaway has a collapsed section of track as a ramp.

New York was added in the American Season Update and features the Brooklyn and Manhattan districts, Central Park, Grand Central Terminal, a subway route with an elevated railway and an industrial zone located behind the Brooklyn Bridge.

New York on the J2ME version 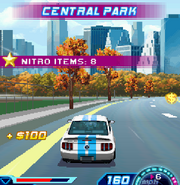 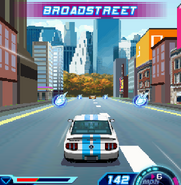 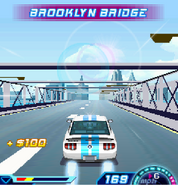 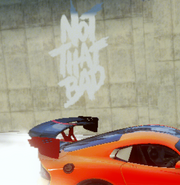 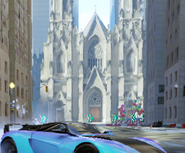 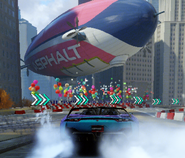 Ditto, on the other side

An aerial view of Bethesda Terrace