Orbital Loop is a fictional location on the Moon.

Based primarily on the Moon, Orbital Loop is home to mining and excavation operations on the lunar surface, as well as within a nearby asteroid field. There are bases on the Moon, many of which are adorned with an assortment of satellite arrays, observatories, solar panels, generators, lunar vehicles and launching pads.

As one of the longest and more challenging tracks in the game, the majority of the different track configurations have the Start Line in or around the orbiting space stations as well as on the Moon itself. These are linked by a series of tunnels, tubes and numerous winding pathways.

There is also a track section composed of solar panels that can be driven on, and the viewing angles can rotate up to 90°, so caution is highly recommended here.

Reminiscent of French Guiana, there is a section where one of the longest corridors bifurcates, and a rocket can be seen launching off into space. Vehicles with high speeds driven by unwary players, or with poor handling and drifting capabilities can easily wreck at the base of the launching pad, as both of the turns are very narrow.

Some of these winding pathways have electrified sections that create electro-magnetic effects around the wheels of vehicles that drive through them, and a platforming section that causes the viewing angles to rotate 180° (this can catch unsuspecting players off-guard and cause them to wreck).

On the Moon itself, there is a quarry zone where drilling operations take place, and this is home to a wide half-arc turn that is very accommodating to wider drifting, but has a giant strip-mining machine that invades the track on every lap and can pose a huge hazard to the player's vehicle.

Within the asteroid field, the track goes through some of the asteroids which have been mined hollow, and are rich with various minerals and crystals, predominantly shards of gold. Cranes and other mining machines can be seen at work here. There is also a helix-spiral turn much like those seen on Sector 8 and Munich Subway.

The following vehicles have their banners depicted in Orbital Loop: 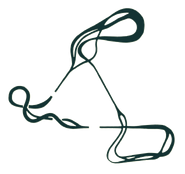 The flight terminal of the space station

The spiral crystal mine