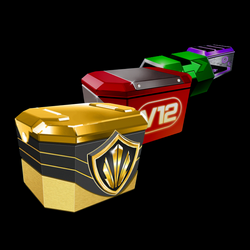 A Pro Kit Box was a random container granting items like Pro Kit cards or Blueprints first used in the Winter Update of Asphalt 8: Airborne. Pro Kit Boxes in the strict sense were removed from the game in the Fifteenth Anniversary Update.

Boxes are mostly opened immediately after obtaining them, but there are a few exceptions when a box is moved to the pending boxes list no matter if there is enough inventory space to open it.

Since the 2019 Spring Update, players are given the option to watch an ad after opening a box to get an extra card twice per day. There has to be a free additional slot in the player's inventory to enable the ad option. For boxes that only grant one specific card, the extra card will be of the same kind, so players have the possibility to increase their number of rare Pro Kits by using the ad option only for these boxes.

Here is a list of all the Pro Kit Boxes ever sold or to be won.

The 2020 Lunar New Year Update replaced the "Get Boxes" with the "Bundles" section so that purchasable boxes can only be acquired with real money through bundles. Basically, all Daily Bundles are variations of the

Its composition is similar to the content of the discontinued

100 and boosters. The prices of the other bundles are linked to the price of a Token Pack with the corresponding number of Tokens, so that players basically buy the Tokens for the standard price and get the boxes and boosters "for free".

The 2020 Spring Update added the

Weekly VIP Bundle which only appears every 7 days and has varying content depending on a player's VIP Level.

Tokens and grant engine/tech/parts cards, with a guaranteed minimum of a certain card type. Starting on Nov 3 2015, the ads for new boxes were not customized for the box anymore, but just a uni red/blue/green box with a background in the same color.

On December 3, 2015, new generic ads were released, now featuring a box with a question mark and a grey background.

As the 2020 Lunar New Year Update removed the Get Boxes section, they are practically discontinued.

Although this box has the outer appearance of a Blueprint box, it contains 1 of every class C part: Tire, Suspension, Drivetrain, Exhaust. Usually it is offered once per month, at the end of the first week of continuous logins.

Random Box 1, 2 and 4. Furthermore, players with a VIP status are rewarded Daily Bonus VIP Boxes like the

As of the Fifth Anniversary Update, the following boxes have replaced the

Free Box 2 †. They can be obtained by watching daily ads.

The 2019 Halloween Update temporarily introduced a daily ads streak system where the Compact Boxes replaced the Optimal Boxes as rewards:

Introduced in the 2018 Spring Update, completing Daily Tasks now counts towards a Streak Reward. Completing the streak requires 12 Tasks to be completed consecutively.

As of the 2019 Halloween Update, the following boxes can be obtained from Mastery challenges:

The Moto Blitz reward boxes were introduced with the 2019 Spring Update. They replaced Boosters, Free Upgrades and Blueprints.

Every Event offers Pro Kit Boxes as a reward. The following boxes can be won (all have 1- to 5-item versions. If there is no article for all versions, only the 1-item version is shown):

The World Tour and later the Festival events have introduced a new sort of boxes ("Supplies" and "Bundles") whose content is not sorted by rarity, but by content type (Blueprint Boxes, Pro Kit Boxes, Tokens and Credits). If the player's inventory is full when opening the bundles, the content comes as specific boxes—thus placing Engines, Tech and Parts separately in the pending boxes list without blocking inventory space. This has two great advantages:

The new boxes are:

R&D events with reference to the Lunar New Year use a Chinese design instead of the regular blue boxes. Example:

Similar to McLaren Championship Mini Boxes, an additional R&D Mini Kit Box was introduced for the Lamborghini Centenario and BMW i8 Coupe R&D:

Introduced with the Enduro Update and can only be earned in Enduro Double Down.

Introduced in the Championship Update and can only be obtained or bought from Championships. The standard colors of championship boxes are

Throughout a championship, "One-Time Offer!" for a Championship Professional Box will show up. Despite the description, the box will be offered several times during the event.

Starting with the 6th Anniversary event, Festivals now feature a vehicle that is rewarded after reaching a certain reward tier. All former Festival Boxes have been replaced with two new types for each event that are granted for accomplishiing festival quests:

The Lamborghini Terzo Millennio, Ferrari FXX K, Volkswagen I.D. R and Lotus Evija Festival Kit Boxes were later also granted as rewards for Daily ads streaks. It can be expected that other Festival Kit Boxes will follow or will be granted by other events as there is otherwise no way to further upgrade Festival vehicles.

Introduced as part of the Rio de Janeiro Update and can only be earned from reaching levels 5, 8-15 of the VIP system as well as a VIP daily login bonus.

Introduced with the Fast Lane Update, this box is rewarded for finishing highlighted races. The timer for new boxes is reset at 0:00 player's local time.