The Renault Trezor is a two-seater electric concept sports car that succeeds the Renault DeZir.

First unveiled at the 2016 Paris Motor Show, the Renault Trezor Concept is a two-seater electric coupe concept car based on its predecessor, the Renault DeZir. This car is expected to enter the market by 2020.

The Trezor has a notable lack of seams on its exterior, the result of its unique clamshell-styled roof which opens by hinging forwards to allow passengers to enter. This car is also one of the most aerodynamic cars in the world, with a drag coefficient of 0.22.

The car's motor develops 260 kW (350 hp) and 380 Nm torque, which gives the car a 0-62 mph (0-100km/h) of less than four seconds. The car is powered by two battery packs with independent cooling systems via variable honeycomb-shaped air intakes on the front. The car has a brake-operated energy recovery system, developed from the Rechargeable Energy Storage System (RESS) technology developed for Formula E cars.

The interior and windshield of the car are colored red. The Trezor also has an OLED touch screen protected with Gorilla Glass on both the center console and steering wheel. 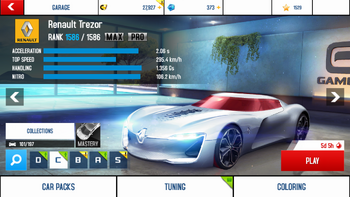 The Renault Trezor was added in the Hot Wheels Update, as a high-end Class C car with the following statistics:

The Trezor also handles very well, complete with a sharp drift radius, and the best nitro efficiency in the game. It is slightly improved over the Peugeot RCZ R's 5/8/11 and the Donkervoort D8 GTO's 4/8/12. The amazing nitro efficiency allows races to be completed even on a single tank and would be useful for long tracks like Tokyo.

However, the Trezor's main downfall is its maximum total speed of 257.9 mph (415.3 km/h), slower than previous and current "kings" of Class C (from at least the Tenerife Update onwards, including the BMW M2) by up to 8.7 mph (14 km/h). In addition, due to being heavily nitro-focused, which greatly reduces its raw top speed to only 76.7% - 90.1% of the raw top speeds of the other Class C cars that travel at or faster than 258.2 mph (415.8 km/h), it is also at a strong disadvantage, although its acceleration can at least partially negate this when the Trezor is compared to the AC 378 GT Z, McLaren M14A, or even the Toyota Supra RZ (Mark IV).

Despite being very stable and having a good grip on the track, the Trezor has a tendency to perform incomplete barrel rolls after driving off curved ramps, possibly due to its extremely wide body.

The Trezor can basically be described as a slightly upgraded ED Design Torq with more responsive steering and better nitro efficiency.

This is the official review of the Renault Trezor on the Asphalt YouTube channel, made by ReV_Tez and published on January 26, 2018:

Final verdict: "The Renault Trezor has an exceptional nitro duration allowing racers to play without the use of extra tank. Unfortunately, it can't compete with the top cars of C Class as it is 2 seconds slower than the Sparta in French Guiana. With one of the highest nitro boosts, it is best to tune this car to a Multiplayer level to take the most advantage of that feature."

Given its extreme acceleration and good handling/drifting, as well as its lower top speed compared to other top-tier Class C cars, the Renault Trezor dominates in short and twisty tracks like Dubai and Venice, but suffers on long tracks like Tokyo and Azure Coast.

However, even on short tracks, it will be closely rivaled by the Sparta and Alfieri, the current overall best Class C cars and two that accelerate and handle/drift well too (though the Sparta is superior over the Alfieri in terms of handling, and the Alpine is superior over the two), but possesses higher total speed, with the Alfieri having a much higher raw top speed.

The Renault Trezor can be obtained by completing its Championship. As of the 2019 Spring Update, upgrades cost

Between December 21-26 2018, the Renault Trezor was available for

The Renault Trezor's Championship was released as the 16th Championship event after the BMW 3.0 CSL Hommage's R&D (2nd revival) as part of the Hot Wheels Update on January 25, 2018. Players are given 7 days to complete the event.

The event was relaunched on November 8, 2018 in the Halloween Update as part of the Asphalt Moments series.

The event was relaunched again on October 16, 2019 in the Sixth Anniversary Update.

Retrieved from "https://asphalt.fandom.com/wiki/Renault_Trezor?oldid=382484"
Community content is available under CC-BY-SA unless otherwise noted.