It is a commonly recurring track in the Asphalt series.

The track here starts at the front of the hairpin. Then a short straightaway with a shortcut located at the downtown area. Afterwards a smooth corner with a long narrow straightaway connects another hairpin that lends to the harbour section. At the harbour was a long straightaway with puddles. Cross the tunnel with a mid size curve and pass through a straightaway the third time to reach the finish line.

Rio de Janeiro was only available on the Android version of the game, later removed and no longer avaliable. 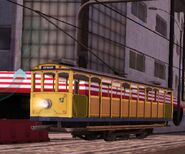 The yellow tram
Add a photo to this gallery

A post-race McLaren MP4-25 with a billboard featuring the splash screen for Asphalt Xtreme in the background.
Add a photo to this gallery

A pre-race shot featuring Corcovado Christ the Redeemer that overlooks the city.
Add a photo to this gallery

A post-race shot of Oceanview Derby, with a McLaren P1™ in the in-game version of the Rio 450 tunnel.
Add a photo to this gallery

A McLaren P1™ GTR after a race in Highland View.
Add a photo to this gallery

Retrieved from "https://asphalt.fandom.com/wiki/Rio_de_Janeiro?oldid=363760"
Community content is available under CC-BY-SA unless otherwise noted.