Asphalt Wiki
Register
Don't have an account?
Sign In
Advertisement
in: Locations, North America, United States of America,
and 3 more

San Diego Harbor is set in a naval base area, evidenced by the presence of various fighter jets and aircraft carriers. Additionally, military vehicles like tanks and armored trucks replace the traditional traffic vehicles present in other locations in the game. Still, in spite of the fact that they look heavier they are easily traffic controlled or downed.

The San Diego Harbor tracks are among the shortest tracks in the game, alongside Dubai and Rio de Janeiro; they are 2.801 mi (4.509 km) long. The San Diego harbor tracks zip through the naval base area, through hangars, industrial buildings, and cargo containers, as well as actually going in and on aircraft carriers.

In the middle of San Diego Harbor Rev. (first lap only), the player must watch out for an incoming fighter jet that flies by at very high speeds and can wreck the player's vehicle. This is especially dangerous for faster cars as they may jump higher and wreck more easily.

The following cars have their banners depicted in San Diego Harbor:

The San Diego Harbor location was infamous for featuring a glitch near the end of each track that would cause the player to be teleported up further ahead, causing shorter lap times than if the player had done the track normally. This later became the base of the Wormhole feature and another glitch in Sector 8.

The glitches in the San Diego Harbor location were fixed in the Winter Update. 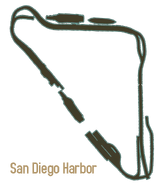 One of the aircraft carriers that serve as parts of the track.

A shot of the warehouse interior.

A Nissan GT-R NISMO having won a Classic event in San Diego Harbor.

A Honda S2000 after a race in San Diego Harbor.

A shot of one of the fighter jets that can be seen on the aircraft carriers. It may possibly be a Lockheed Martin F-16 variant.

The parking area that is strictly reserved for tanks.

The main warehouse is owned by the Abelion Corporation.

A shot of the aircraft carrier designated "Stubbington".

A shot of the aircraft carrier designated "John Norris".

A billboard for Asphalt 9: Legends, as seen near the industrial fuel-refinery area. 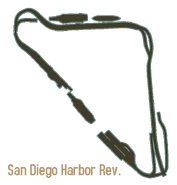 A shot of the shipping container dockyard.

A shot of the heavy sliding doors that serve as obstacles on both tracks.

A McLaren P1™ GTR on the bridge with a barrel roll ramp that allows contact with the incoming Fighter Jet.

A Lotus Exige S Coupe having just barely missed the fighter jet. At this point, the jet is already off-screen.

A McLaren P1™ after a race in San Diego Harbor Rev.

A billboard for Asphalt 9: Legends, seen near the shipping container dockyard.

Kawasaki z800 landing on an aircraft carrier after a double grab

Wreck after hitting a fighter jet
Community content is available under CC-BY-SA unless otherwise noted.
Advertisement