Scotland is a country part of the of the United Kingdom. Both Scotland and England share the Anglo-Scottish border to the south. Past the border is the Atlantic Ocean with the Irish sea to the south-west. The country is made up of more than 790 islands including the Northern Isle and the Hebrides. Scotland has an estimated population of 5,424,800 as of 2017. The total area of Scotland is 78,772 km2 (30,414 sq. mi) which is close to the same size of the Czech Republic. The largest city in Scotland is Glasgow which has a population of 621,020.

Scotland is one of the original playable locations in Asphalt 9: Legends.

Field with flowers and windmill

A wreck cargo ship with the castle on the right 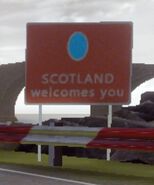