Sector 8 is a fictional race track in the Asphalt series.

Sector 8 is designed as a futuristic race track set above the Atlantic Ocean, similar to many tracks from the WipEout futuristic racing series. Sector 8 features a largely blue/cyan/orange hexagonal motif combined with square and octagonal motifs.

The race starts at a futuristic grandstands-like structure, with the track weaving up and down for a brief period of time. After that, the track splits into three parts:

The three paths eventually merge into one and the track enters a 225° banked upwards curve to the right. Once its banking angle changes to 0°, the track enters a bottleneck, with a blue nitro power-up on the right and an orange nitro power-up on the left. At the end of this section of track, there are two barrel roll ramps that lead into two pipe tunnels in another structure on both sides.

In a similar fashion to some tracks from Wipeout series, such as Sinucit, the two pipe tunnels in Sector 8 are identical in layout, albeit with different nitro power-up placements for each. Both paths have three turns, two in one direction and one in the opposite direction.

The end of the tunnel drops down to a wider section that has two paths. Either side of the track has a barrel roll ramp that leads to a vortex, either of which teleports racers to an exit vortex ahead and onto a small rectangular platform, allowing racers to get ahead more quickly. Staying on the platform is flanked by "SECTOR 8" small walls and pillars, as well as a ramp on the end of the platform. After the ramp, the track diverges into two paths again: on the left is a half-loop, which is the shortcut; and on the right is a upwards spiral curve to the left, with a ramp that leads to another vortex, teleporting racers to the other side of the curve (up where the half-loop ends). Both paths merge back into one here.

The track takes a 45° turn to the right and runs through a series of dips, with one side having a gentle downwards slope and the other being a flat section of track that flies above said downwards slopes and from where racers can perform Flat Spins. On the third dip, though, the right side is a flat platform that is narrow and sometimes dangerous to fly off from due to the risk of crashing into a wall ahead. After the dips, the track takes another 45° turn to the right before entering Sector 8's most infamous section: its 495° ending downwards spiral helix. At the start of this helix, a quarter-pipe-like section can be seen. Clearing this curve requires drifting, and careless racers may plow into either the half-pipe section and lose a lot of speed or crash into the orange hexagonal guardrails and wreck. After clearing the 495° ending curve, racers sprint down and onto the finish line for either another lap or the end of the race.

Sector 8 appears to have been inspired by Airship Fortress from Mario Kart DS and Mario Kart 7. Sector 8 also takes inspiration from Hot Wheels tracks due to having sharply-banked curves.

Upon the release of the Hot Wheels Update, the track surfaces of Sector 8 were re-painted in a special orange color to celebrate the Championship Events that featured the track. This version of the track has a few notable differences to the blue version of Sector 8, some of which include :

This race takes place on a slightly altered variant of the regular Sector 8 track.

The special orange Sector 8 variant made a return for the Hot Wheels Cup which took place from March 15-19, 2018.

Here, it is configured much like the regular blue Sector 8 only with the moving obstacles, lasers and traps enabled, but it lacks the shortcut pipe tunnel vortices and the 495° helix spiral vortex. The shortcut vortices on either side of the large platform (following the pipe tunnels) and the vortex that is found on the upwards spiral curve to the left have also been removed.

The following vehicles have their banners depicted in Sector 8:

Sector 8 was infamous for a glitch where if the player made a 180° turn on the quarterpipe ramp and flew off of it, they would immediately finish the race in first place. Some players were banned for using this glitch and the glitch was fixed in the Decals Update.

Sector 8, in Tag Racing, has a version without portals. The AI has not changed, though, leading to some AI racers jumping off the track into the ocean. 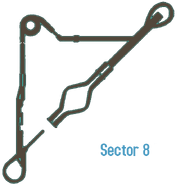 A McLaren P1™ in one of the pipe tunnels.

A Koenigsegg Agera R traveling through the half-loop section.

A post-race shot of Sector 8. 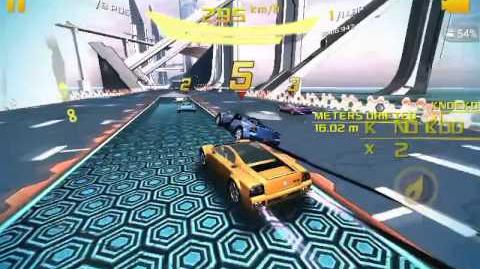 Sector 8 was re-colored in orange to commemorate the Hot Wheels Update. 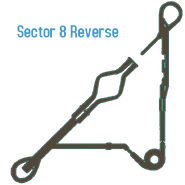 During time-limited events that involve Sector 8, a moving wall reminiscent of San Diego Harbor may appear.

A McLaren P1™ GTR traveling through the 1000-degree spiral curve helix after finishing a race in Sector 8 Reverse.

An Alfa Romeo 4C after a race in Sector 8 Reverse.