Celebrate the Six-Year Anniversary of Asphalt 8 with a NEW TRACK on the moon! Join the Anniversary Festival to win a ton of rewards including the unbelievable Lamborghini Terzo Millennio.

3... 2... 1... LIFTOFF
Strap in for the lunar base and see the world like never before. Ride upside down on magnetic tracks, beware the massive mining machines, and drive straight through the moon's core!

ANNIVERSARY FESTIVAL & EVENTS
Unlock the Lamborghini Terzo Millennio in the Anniversary Festival and get ready for new action-packed events! Race for a chance to get the Rimac C_Two, Lamborghini Aventador SVJ, Acura NSX GT3 Evo and more!

NO MORE ELITE VEHICLES
Starting now, no vehicles will have ELITE status. No more waiting to recharge! All fine-tuned vehicles now have a standard stat distribution.

ASSEMBLY MODIFICATIONS
Several vehicles will no longer require Blueprints, such as the ED Design Torq, McLaren M14A, Sbarro Sparta, and Porsche 718 Boxster S. Check the forum for the full list.

XBOX LIVE INTEGRATION
From now on, you can use your Xbox Live account in Asphalt 8 for authentication, saving progress and completing Xbox Live achievements!

Read the full list of changes at the Gameloft Forum. 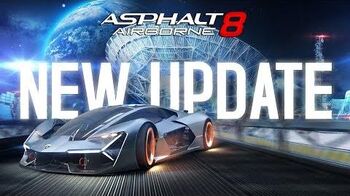