The Snowflurry Festival was a Festival event for Asphalt 8: Airborne as part of the Holiday Update. The event was available between December 24, 2018 - January 3, 2019.

The objective of the event is to collect

​ Festival Coins and exchange for rewards.

The Festival Coins can be collected by the following means:

Note: Milestone rewards are not granted automatically, but have to be claimed by tapping on them and then tapping on the "claim" button which can easily be overlooked.

Each of the 30 Snowflurry Quests has 3 levels to complete and award Festival Coins when a level is completed. Completing all 90 quests awards a total of 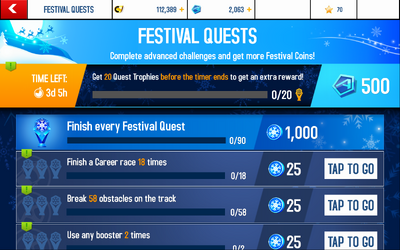 The Snowflurry Festival has an additional three rewards of

The description of the Festive Snowflurry Package could lead to the conclusion that it contains 2 of every rare and legendary type, but then it would have to contain 78 instead of the mentioned 70 cards (16 rare Class A and S parts, 2 rare and 2 legendary Tech, 6 rare and 13 legendary engines = 39 cards, 2 ⋅ 39 = 78).