This is an old box version. See Starter Box for the current version.

The Starter Box is a Pro Kit Box in Asphalt 8: Airborne. It was introduced in the Motorcycles Update and can be obtained for

Fusion Points. The Starter Box was originally priced at

5,000 before being increased to

Ultra Fusion Box †, it has a much better price per item—which leads to the counterintuitive result that the Starter Box grants twice as much legendary cards for the same amount of fusion points as the Ultra Box. Therefore the Starter Box is the better choice if a player has accumulated fusion points and is looking for legendary cards (see § Fusion boxes in Pro Kit Box price comparison for details). 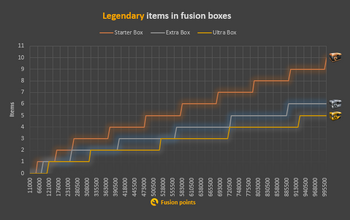 The Starter Box has a decent drop rate of V8 Engines.

With regard to the ratio of Early to Initial Tech, the Starter Box has a clear focus on Early Tech.

The Starter Box grants significantly more B Class parts than D or C. It is usually one of the common boxes with the most B Class parts.

Retrieved from "https://asphalt.fandom.com/wiki/Starter_Box_(4.2.0)?oldid=301856"
Community content is available under CC-BY-SA unless otherwise noted.