The map includes a port area (which in some variants is being hit by a tornado), a canyon area with a railroad, a mine tunnel, and a town area.

Cars with good acceleration, drifting, and handling are recommended here.

In the mine tunnel 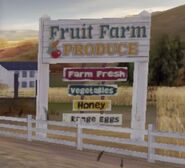