Welcome to my profile, Asphalt fans and fellow racers!

I'm ShinnyShin and I'm one of the many car lovers and volunteer editors on this Wiki.

As of the Motorcycles Update, my in-game tag is now also ShinnyShin.

I've been playing Asphalt 8: Airborne since February 2014 and I'm quite proud to say that to this day, I have never, ever spent any money on this game and have come quite far on just my own skills and a little bit of luck!

I do all of my racing on my one Android account, so just to avoid any confusion - if you see anyone else on another platform with a similar name, that isn't me!

I update my profile page regularly, so be sure to check back often!

I play on the Android platform and these are my current stats :

- Most expensive Tokens car : Apollo Intensa Emozione which has a hidden price of

Some handy shortcuts to the vehicles, how I got them and what they are used for :

These are all 221 of the cars and bikes that I own in Asphalt 8, in order of how they appear in the Garage.

Tuning levels are as indicated with the car / bike names below :

Vehicles to Win / Obtain in Future

Meeting Banie A during a Validation Race 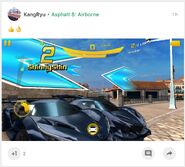 Meeting KangRyu during a Free Race

Meeting LyingGenius7074 during a Validation Race

Meeting @ZlatanS during a Validation Race

On the sunny streets of Barcelona!!

Who wants to go on a cruise?

Took over a year and a half to get this beauty

Santa has his sled. I have this!!

Advancing with the Lamborghini Gallardo

The SV with the pre-update rims!!

The Egoista on its home track!!

9FF just HAD to be different!!

Enjoying the Aquarium with a friend

Hit the mall with one of my biggest rivals ...

... then next to Odaiba Park to hang out by the fake Gundam statue

We later meet again in Dubai!!

This Veneno knows what's up ...

... and this passing AHGT joins in on the fun

Watching the ships go by with a friend

One of my most powerful cars, the Lamborghini Centenario.

Racers I've Come Across (from this Wiki, Facebook & Google+)

During my time here I've had the pleasure of coming across several contributors to this Wiki on the Android platform. Who knows, it could be you next!

I'm honored to have met the following racers in MP, TLEs and MPEs. Below are the names and how many times I've crossed paths with them. Some of them are featured in my Gallery above! Check it out:

If it's during Validation Races and we happen to meet each other, feel free to stop for a selfie or two!

And if you are listed below, you qualify as one of my rivals!

These are some highly skilled, prolific Champion / Pro League racers whom I've scrapped with at least 10+ times during one or more Seasons. The kid gloves come off whenever I meet these guys and gals in competitive Multiplayer races, TLEs, MPEs and Leaderboard rankings :

These are the driving forces (see what I did there?) that keep me going. Even though 100% completion can never be achieved in this game, this will be as close to a complete gaming experience as possible for me.

Some of these Achievements are from the very early days of Asphalt 8:

Thanks for taking the time to read this far! More to come soon!